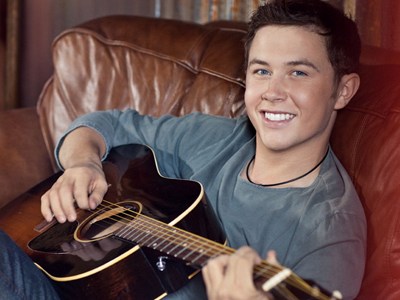 Mercury Nashville/19 Recordings/ Interscope artist Scotty McCreery releases a new single today called “The Trouble With Girls,” which is the second single from his much-anticipated debut album, Clear As Day, due Oct. 4.

“It’s a really sweet song,” Scotty says. “I played it for my sister and I said, ‘Would you like to hear what’s said in this song?’ She said, ‘I would love to have a guy say some of this stuff to me.’

“It’s talking about how great they are and it’s tough for the guy to handle because he just loves it. It has a nice twist to it. It’s like the songwriters wrote it just for me.”

The chorus of the song, written by Phillip White and Chris Tompkins, is, “They smile that smile/ They bat those eyes/ They steal you with hello/ They kill you with goodbye/ They hook you with one touch/ And you can’t break free/ Yeah, the trouble with girls/ Is nobody loves trouble as much as me.”

“The Trouble With Girls” is one of Scotty’s favorites on his new album. “Right off the bat when I heard it, I told my mom when we were listening to the demo, ‘This is the kind of song when you are in the kitchen doing dishes that makes you stop what you are doing and listen to it.’ It struck a chord with me and I knew it was something I wanted to put on the album.”

This song is the follow-up to “I Love You This Big,” a Top 15 hit that had the highest debut on the Billboard Hot Country Songs chart for a new artist’s first single since at least 1984.

In May, Scotty won Season Ten of American Idol, becoming the youngest male winner and the only country male winner in the show’s history. A record-breaking 122.4 million votes were cast during the finale. The final show attracted 29.3 million viewers and 38.6 million people tuned in to see the winner’s name announced. He first performed “I Love You This Big” on the finale show and later followed with performances of the song on Today, The Tonight Show with Jay Leno and Good Morning America.

“This is the first time we’re getting the chance to put out new music and the music we’ve been working hard on,” he says of his new single. “I’m glad the fans will finally be able to get a little taste of what the album is going to be like. I’m looking forward to getting out there and singing it.”

He is currently on the American Idols Live! Tour, which Pollstar recently ranked at No. 14 on its list of the Top 20 Concert Tours.