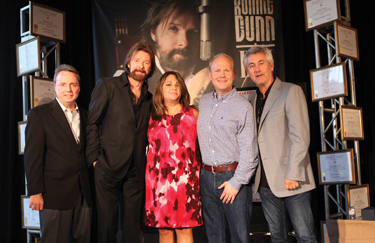 On August 4 BMI was proud to honor one of country music’s most successful songwriters, Ronnie Dunn, at a reception held at their Nashville offices. Since arriving in Nashville back in 1988, the Oklahoma native has amassed a songwriting repertoire that includes standards he wrote exclusively like “Boot Scootin’ Boogie,” “Neon Moon,” and “She’s Not the Cheatin’ Kind,” as well as hits with big name co-writers such as “Red Dirt Road” (Kix Brooks), “That Ain’t No Way to Go” (Kix Brooks and Don Cook), “Believe” (Craig Wiseman), and many more that have altogether garnered an astounding 60 million performances. Dunn’s friends, colleagues, and associates were all on hand to celebrate this career milestone as Dunn now rises to the top-tier of BMI troubadours with Merle Haggard, the Bee Gees, and Gamble & Huff.

The event also included a presentation to Dunn from Sony Music Nashville, in recognition of the #1 Billboard Top Country Albums chart debut of Dunn’s self-titled debut album, which released in June and includes the first single, “Bleed Red,” as well as Dunn’s current hit, “Cost of Livin’.”