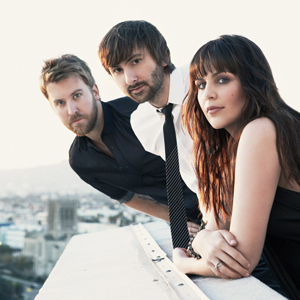 Reigning CMA and ACM Vocal Group of the Year Lady Antebellum celebrate their career fifth No. one song this week as the lead single “Just A Kiss” tops the Billboard Country Singles chart. The track simultaneously earns PLATINUM certification and spends a third week at No. one on the Billboard Canada Country chart. “Just A Kiss” is setting the pace for the multi-platinum group’s upcoming third album OWN THE NIGHT due out Sept. 13.

“Seeing country radio and the fans embrace the first single off our new album like this has been amazing and also a little relieving,” said Lady A’s Charles Kelley. “There are definitely some nerves and anxiousness involved when you are introducing new music, and this reaction has been beyond what we hoped for.  It just makes us even more excited for Sept. 13 to get here.”

“Just A Kiss” resonated with fans immediately, debuting at No. seven on Billboard’s Hot 100 Chart to become the highest debut by a country group in the chart’s 52-year history. OWN THE NIGHT follows the band’s GRAMMY winning second disc NEED YOU NOW. Since its release in Jan. 2010, the album has sold over five million copies across the globe, spawned three multi-week No. one hits (“Need You Now,” “American Honey,” “Our Kind of Love”), taken home five GRAMMY Awards (a career total of six) and scored over a dozen other award show trophies.

For updates on OWN THE NIGHT, visit www.ladyantebellum.com.