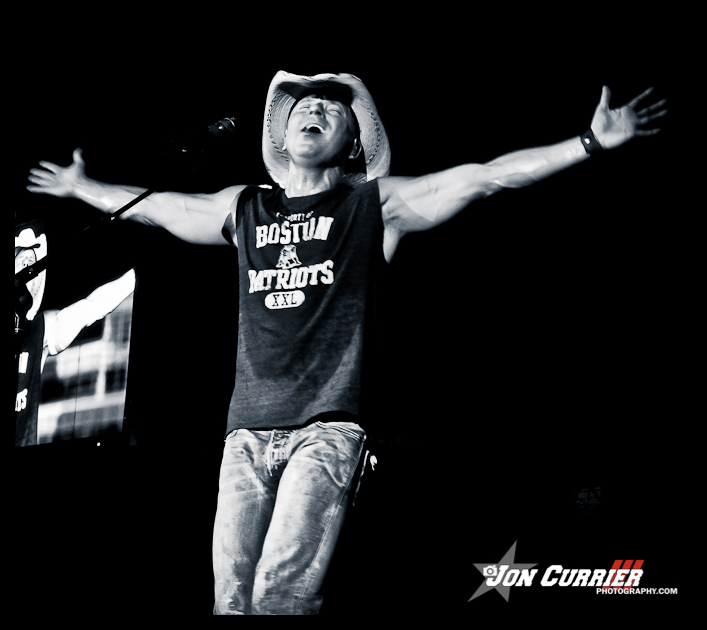 Hurricane rains did nothing to dampen the enthusiasm of Kenny Chesney’s fans on Saturday in Foxboro, MA, as 2,000 tickets released on the day of the show were snapped up within minutes despite hurricane warnings, bringing the attendance for Saturday’s show to 59,000 and the total for Chesney’s two sold-out Gillette Stadium shows to over 106,000.

As the first ring of storms from Hurricane Irene showered the capacity crowd in advance of Sunday’s expected storm impact, Chesney celebrated the close of his 2011 ‘Goin’ Coastal’ Tour with a triumphant set that included a massive crowd sing-along on “She’s From Boston,” a high kicking chorus line by Billy Currington and his band on “No Shoes, No Shirt, No Problems,” an audacious version of “Baby Got Back” with Zac Brown Band, and a mid-set award by CMA President Steve Moore to Chesney keyboardist Wyatt Beard as the CMA’s first-ever ‘Touring Musician of the Year.’ Chesney was jubilant during the show, calling the Foxboro crowd “one of the loudest and most loving crowds of the tour.” Beach balls flew through the air and a sunny spirit prevailed while waves of rain drenched the audience and the performers several times throughout the evening.

Chesney’s triumph at Foxboro was an exciting cap to an eventful week for the superstar. On Thursday, the artist regaled his fans at the first CMA Songwriter Series event in Boston, an intimate performance chat with a handful of Music Row’s biggest hitmakers. Chesney also made a surprise visit to the Boston College football team the Eagles on Friday following a screening of his documentary ‘The Boys of Fall’, then spent an hour practicing with the New England Patriots but was unsuccessful in attempting to catch passes from Quarterback Tom Brady (Kenny’s only brush with defeat this week.)

Then Friday evening Chesney headed to Foxboro for the first of two capacity shows. Chesney’s Sunday, August 28th show had been rescheduled to Friday after a direct hit from Hurricane Irene became a real possibility. In a rave review of Friday’s show, the Boston Globe commented “is there any musical artist for whom tropical weather is more topical than Kenny Chesney…Chesney instructed the crowd to treat the show like a hurricane party…and he provided the perfect soundtrack.”

Chesney’s triumphs in Boston capped a tremendous year that began with the Sept. 2010 release of ‘Hemingway’s Whiskey’ (BNA Records), and has included three #1 singles, the highest ticket sales for any country concert in New York/New Jersey history, and over 1.1 million tickets sold for the ‘Goin’ Coastal’ Tour. In February, Chesney was also honored as “Tennessean of the Year” by the Tennessee Sports Hall of Fame.