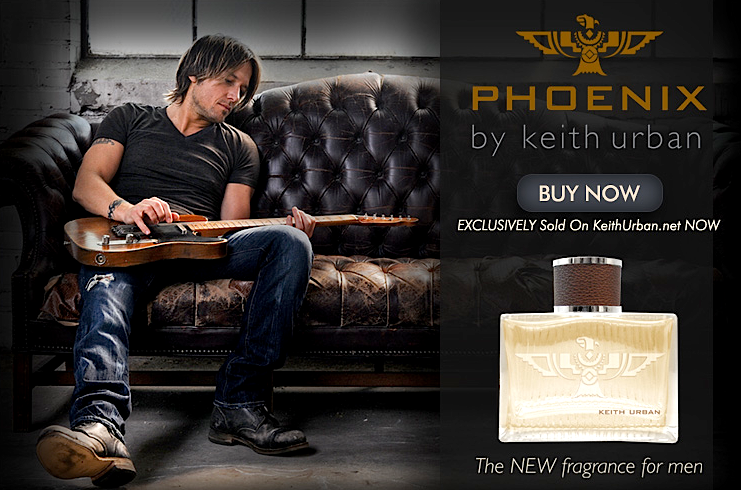 Keith Urban is set to release his first fragrance for men, PHOENIX by Keith Urban, in partnership with Boom LLC.  The fragrance, which launches worldwide in the fall, is not only reflective of his personal triumphs, but is also an expression of his spirit. The phoenix symbol resonates with Urban for its immortality and ability to renew and be reborn.

Urban says, “I grew up with a father that had great taste in music, cars and colognes.  So the idea to eventually create my own fragrance seemed natural.  I’ve always loved the feeling that comes from finding the right scent and the way it can say so much about a person.  We created Phoenix to express just the right blend of masculinity, mystery and sensuality.”

Urban worked closely with Boom on the creative package design and fragrance development. “Keith was very hands-on with this process and we are confident that it will be well received by his fans and that his international appeal will translate into commercial success for PHOENIX,” says Art DeGaetano, President & CEO at Boom LLC.

Urban envisioned PHOENIX as a modern twist on a classic, creating a leathery gourmand scent described as sexy, rich and masculine.  The fragrance is introduced with top notes of blackberries, cognac and plum; segues into the aromas of dark chocolate and crisp fir balsam with a finish of warm cashmere wood in the background.

Fans will get a sneak peek of PHOENIX during Urban’s 50+ city Get Closer 2011 world tour. The promotional campaign, which features giveaways and sampling opportunities – including the distribution of scented PHOENIX tattoos at all future concert venue stops in the USA – marks the first time a cologne will be marketed in conjunction with a country music concert tour.  Fans will also have access to an exclusive online pre-sale at www.KeithUrban.net/PHOENIX.

PHOENIX will launch internationally to mass-market retailers, including CVS, Rite-Aid and Sears in the U.S., Shopper’s Drug Mart in Canada and Target and David Jones in Australia, beginning in October.  The price point ranges from $24-$48.