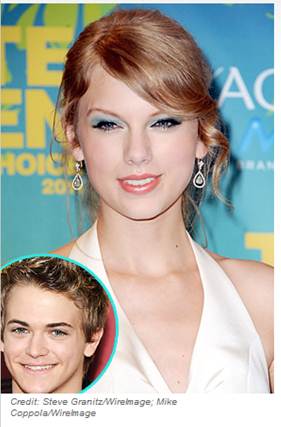 Hunter Hayes has been making an impact on country music since his release of debut single “Storm Warning”.  Hayes just recently made his debut at the Grand Ole Opry on August 12th and has wrapped up touring with Taylor Swift on her Speak Now Tour.  US Magazine caught up with Hunter for interview where he discussed music, songwriting and opening for Taylor Swift.

US: When did you start making music?

HH: I started making music around two years old. My parents noticed I would make musical instruments out of household items and so my grandmother gave me a toy accordion for my birthday. I had no patience for lessons so I just sat around the radio and learned by ear on my own time and in my own way. I just fell in love with music.

US: Is there anything that inspired you to start playing music?

HH: It was more of a natural instinct. It is a strong passion that I have always had and throughout my life it hasn’t wavered or changed. It has gotten stronger.

US: How did growing up in Louisiana influence your musical style?

HH: It has influenced me heavily in the way of Cajun people and music. It is all about the feeling and groove. The strong emotional side of it influenced my writing, producing music, and live shows. It translates into everything that I do. I played at Jazz fest several times when I was a kid in front of big crowds. It was fantastic. We actually blew the sound system one year, which is a total rock star move. It was cool to be at the same festival as a lot of my favorite stars. I hope to actually get back and play that again someday.

US: Where do you draw inspiration from when writing music?

HH: I like to write about things that have absolutely happened an hour ago. That is what I feel strongly about and that is what is going to move me to write. Even out on the road, when little things happen I am moved to sing about it. It is therapy for me to sing and it means more to me if I get to sing about something that I wrote. I want to write songs that are like my favorite songs that I grew up listening to because they moved me and meant something to me. I felt like they were written about me. I felt like I could sing along with them and there was no gap between me and whoever was singing. Good or bad, the songs that I turn on at the end of the day and crank up in my car is the song I could only dream of writing. When I am stuck on thoughts and lyrics I will sit down with my Iphone and paragraphs of thoughts will spill out. I will write down versus and choruses and then grab my guitar and come up with a way that will fit or vice versa.

US: Is writing therapeutic for you?

HH: Absolutely. It is the only way I can figure life out. I have to get it out because I have to think it through. If I am in a hotel room at one o’clock in the morning, good or bad, I have to get on my lap top, crank something up and sing a long or I have to start writing. I cannot live without music in that way.

US: What influenced your song “Storm Warning?”

HH: I fell in love with the title. Within thirty seconds it reminded me of this girl that I wanted to meet and hang out with. I had all of these red flags in the back of my head telling me this was a stupid idea. I just didn’t care. I started talking endlessly and we wrote the song. I loved co writing this song because the co writers will pull stuff out of me and allow me to spill my guts, which is difficult because I am a naturally shy guy. It just so happens that we picked it as our first single. It is a blast to play live and it is fun because we now have people singing along.

US: What is your next single?

HH: My next possible single is called “Wanted.” I was trying to write a love song that said more than I am really crazy about you. It is easy to say I need you in my life but to me it was stronger to say that I just wanted to be with this girl all of the time. I loved her company and I loved who she was. I finished the song in less than an hour. When the vibe is right in the room and you are saying something you really mean it just pours out.

US: What can we expect from your upcoming album?

HH: I wrote all the songs and I ended up playing everything on the album because that is how I have always done my demos. It was born out of necessity because it was something I had to do to finish the song. When I write I have to hear it. I played thirty instruments on the album. That is what six months in the studio will do for you.

US: How did you react when you found out you would be opening for Taylor Swift?

HH: I was pleasantly shocked. We had picked the single but the record wasn’t complete. I was just sitting there hoping that we would get to play this album on the road and then we find out that we get to play on the Taylor tour and that is a heck of a way to start. It has been an absolute blast. It is way above my expectations and the tour is a dream come true.

US: How did you first get Taylor Swift’s attention?

HH: We put an iPod Nano together with a bunch of unfinished songs and filmed a little video saying, look I am a huge fan and I just wanted to see if there was any way I can get this music to you and introduce you to my stuff. I was hoping to do something with her in the distant future. Sure enough she listened to it and she was so complimentary. I was speechless.

HH: She is super nice. I have a lot of heroes in the music business and I have met most of them, including Brad Paisley and Keith Urban. They have all been supportive of my crazy dream and they share my love of music. She is one of those. She was so welcoming and was like, ‘so glad to have you.’ I was like, ‘are you kidding I am just glad to be here.’ I am still a little star struck when Taylor comes around.

US: Has Taylor Swift given you any advice?

HH: She has shared stories of her radio tour, which was cool to me and I was taking notes. I more or less am taking notes as far as listening to the stories and how she handled things.

US: Do you get to hang out after the shows?

HH: She has a pretty busy schedule and fortunately now I do too. We talk at least once a day and just chit-chat when she has two seconds. She is super cool.

US: Do you have any love interests?

HH: No. I am still trying to figure out what the right relationship will be and what love means. I am writing about it so I can figure it out for myself.

US: Throughout this journey what has your most memorable experience been?

HH: This year has been stunning. Every day I can walk on the bus and just hoot and holler about something. A couple of weeks back I got to hang out with Keith Urban.  We have met several times and whenever we run into each other he is like, ‘Hey Hunter how is it going? I love the new single.’ He is so complimentary. I was watching him do his sound check and he hands me his guitar and puts it on me and I am playing Keith Urban’s guitar and freaking out. He invited me up on stage to play a song with him. He had asked me who I listened to growing up and I looked at him and my buddy and was like, ‘you.’

To see the complete article in US Magazine, please click HERE.  For all the latest on Hunter Hayes, please visit his official website www.HunterHayes.com.