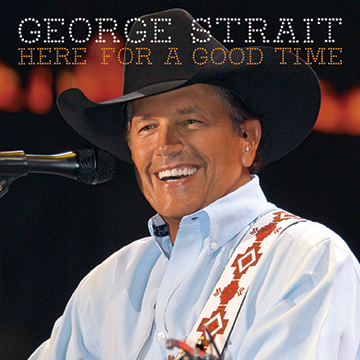 The King of Country Music is releasing his 39th studio album, Here For A Good Time, on September 6th and there is one thing that’s perfectly clear – George Strait is having a really good time doing what he does best – making music. The Country Music Hall of Famer co-wrote seven of the album’s 11 tracks with his son Bubba and legendary songwriter Dean Dillon.

Strait co-produced the album with his long-time friend and legendary producer Tony Brown. It was recorded at Shrimpboat Sound Studio in Key West, FL – the same studio where Strait recorded his last three award-winning albums.

Starting today, GeorgeStrait.com is offering an exclusive album pre-order package that includes the full length Here For A Good Time CD, a limited edition T-Shirt, poster and instant download the single “Here For A Good Time” as well as a sweepstakes to enter for a chance to see George Strait on tour in 2012.

The title track “Here For  A Good Time,” written by Strait, his son Bubba Strait and songwriter Dean Dillon, is Strait’s 89th career single and his second highest debut in his storied career on the Billboard Hot Country Songs chart.  Currently at No. 16 on both the Billboard and Mediabase charts after only eight weeks. This is his highest debut since “I Saw God Today” debuted Top 20 in 2008.

Strait may have penned  the lyrics “I ain’t here for a long time, I’m here for a good time” in his current single but his amazing career says otherwise.

With a career spanning more than 30 years, George Strait has the most number one singles of any artist in history including Elvis (57 to date inclusive of all charts).  He has sold nearly 69 million records and with 33 different platinum or multi-platinum albums has the most RIAA platinum certifications in country music and the third in all genres, behind The Beatles and Elvis Presley. Strait was inducted into the Country Music Hall of Fame in 2006.

Here For A Good Time includes the following tracks: