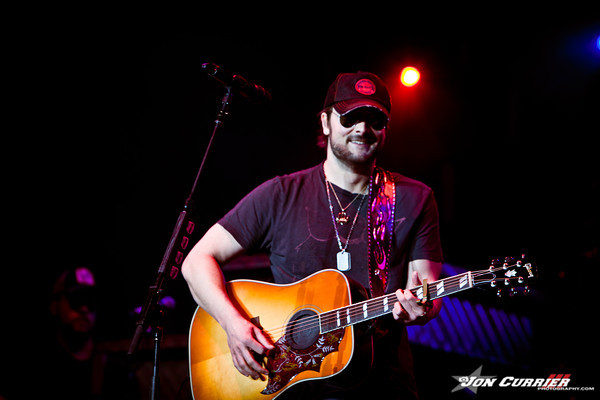 Eric Church has been setting the charts on fire since the release of his third studio album, CHIEF, on July 26. He has also been rocking the stage on Toby Keith’s Locked & Loaded Tour this summer.

We got the chance to catch Church perform on one of his west coast stops. Church entertained almost 10,000 fans who sang along with him as soon as he stepped on stage and started with “Before She Does” from his debut album Sinners Like Me.  Eric performed songs both old & new, and while looking around in the crowd fans were singing along to them confirming they have been Church fans for quite sometime.

Church’s energy on stage is electrifying. He engages the crowd immediately, keeping fans entertained from start to finish and of course leaves fans wanting more. Church has a full set list before him  and while he addressee his fans & interacts with them,  the main focus is putting on a performance for everyone to enjoy. He rocks tunes such as “Drink In My Hand”, “Sinners Like Me”, “How About You”, “Springsteen”, “Homeboy”, and many, many more.  Eric also treats fans to his banjo picking skills as he performs “Creepin”.  “Love Your Love The Most” is still a favorite amongst fans as the crowd belted out the entire song from beginning to end.  The grin on Eric’s face certified that he loved being serenaded by his fans. “Smoke A Little Smoke” served as a strong closing song to his set getting fans excited and ready for Toby Keith to hit the stage.

If you haven’t had a chance to catch Eric Church live in concert, be sure to check out his tour dates to see if he is coming to an area near you by clicking HERE.  After seeing a live Eric Church performance, you will leave as a Church Fan for life!

Church’s new album CHIEF is available in stores everywhere as well as digital outlets such as iTunes.  Keep up to date with Eric Church by visiting his official website www.EricChurch.com.