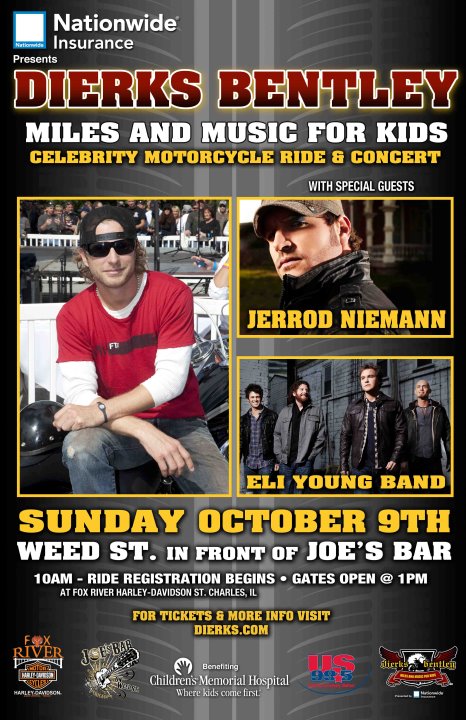 Multi-platinum country star Dierks Bentley announced today that he will take his Miles & Music for Kids charity motorcycle ride and concert to Chicago, IL on Oct. 9.  Over the series’ six-year history, Bentley has raised over $1.6 million for Children’s Miracle Network hospitals and plans to donate the upcoming proceeds to Chicago’s Children’s Memorial Hospital.

The first-ever Chicago stop for Miles & Music will depart from the Fox River Harley-Davidson  (131 S. Randall Rd., St. Charles, IL 60174). The hour and a half long ride will end with a street festival outside of Joe’s Bar (940 W. Weed St. Chicago 60642) for a jam-style concert featuring Bentley and friends Eli Young Band, Jerrod Niemann and more.

Tickets for the family-friendly event go on sale this Fri., Aug 26 at www.dierks.com. Tickets for the ride and concert are $40, or those looking to attend the concert only can purchase tickets for $20. Special VIP packages are also available.

In 2009, Bentley joined forces with Nationwide Insurance, CMT ONE COUNTRY and the Children’s Miracle Network to take the successful “Miles & Music for Kids” benefit on the road, and has since visited five cities in addition to his annual Nashville event. For the latest news and ongoing artist announcements, visit www.dierks.com.