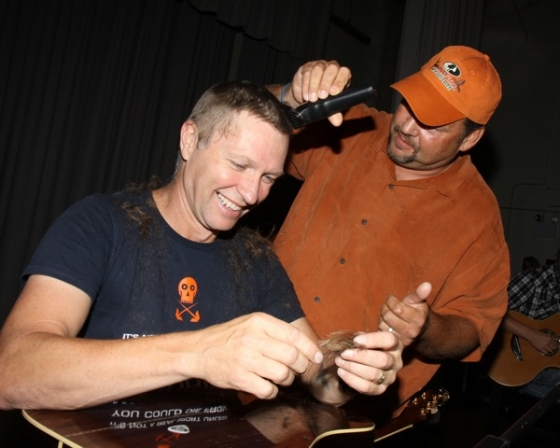 Country Music superstar and Outdoor Channel host Craig Morgan is taking it off for a good cause as he let a fan shave his head as part of a live auction that took place over the weekend during his 5th annual Charity Motocross Ride, Concert and Sporting Clay Shoot! The highest bidder, former NFL player Robb Nelson, won the right to give Morgan a high and tight haircut onstage at the concert, raising $1,200. A custom dirt bike was also part of a live auction item and brought in an additional $12,500.

Proceeds from the weekend’s activities, which included a celebrity Motocross Ride, Concert and Sporting Clay Shoot, benefit Billy’s Place, a home for temporarily displaced children in Morgan’s hometown of Dickson, Tennessee, just outside Nashville.  The total monies raised during the two-day event will be announced in the coming days.

Morgan’s new single “This Ole Boy” was recently released by Black River Entertainment.  Written by Ben Hayslip, Dallas Davidson, and Rhett Atkins, “This Ole Boy,” the title track and lead single from Craig’s new album, expected early 2012, is the perfect sing-along country love song.  Fans can sing along with their very own copy at iTunes http://bit.ly/ThisOleBoy-iTunes and Amazon http://amzn.to/ThisOleBoy.

Morgan can also be seen in the second season of his Outdoor Channel series, “Craig Morgan All Access Outdoors,” with episodes airing throughout the year.

Keep up to date with Craig Morgan by visiting his official site, www.CraigMorgan.com.