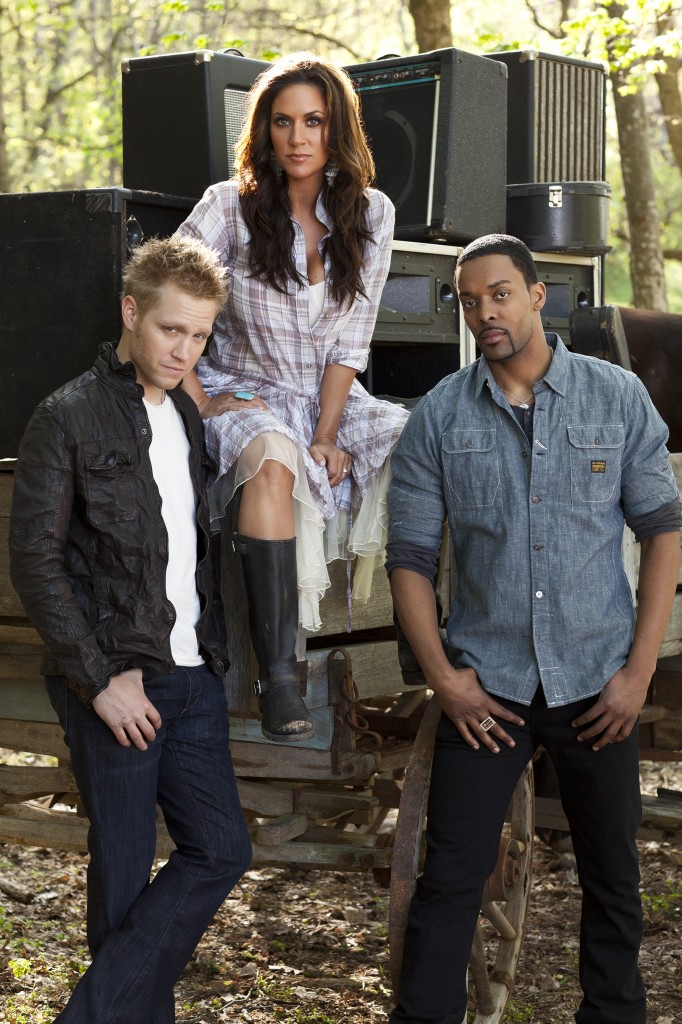 The Farm is a brand new trio from Nashville that is comprised of Krista Marie, Damien Horne & Nick Hoffman.  All 3 come from solid musical backgrounds and have taken their talents and the blend of their amazing vocals to form a trio that is unique & fun which is a great welcome to the country music genre.

CountryMusicRocks caught up with Nick Hoffman who is pulling double duty as he is currently out on tour with Kenny Chesney.  When he is not on stage “fiddlin’ around” on the Goin’ Coastal Tour, he is traveling with Krista & Damien as they are visiting country radio stations all across the US  introducing The Farm & their debut single “Home Sweet Home”.

Nick gave us some great insight into The Farm as he revealed who they are and what they are all about.  Nick is also co-producing the album alongside popular songwriter/producer Danny Myrick who is an essential piece to the trio.

CountryMusicRocks (CMR): Tell us about The Farm.  I know that all three of you come from different musical backgrounds sort of trifecta of music.  Give us some insight as who to Nick, Krista and Damien are and how you guys became a group?

Nick Hoffman (NH):  The Farm is an interesting group because we really do all come from three completely separate wavelengths when it comes to everything from our personal lives to music.  But what we all have in common is a common love for country music and we all come from country roots, and that transfers into the music.  You have a guy like Damien that is a North Carolina boy that is deep in Southern Soul tradition and you get a girl like Krista who is an upstate New York country-girl that rides motorcycles & is a motocross champion and comes from a musical family, and you add that with my Minnesota raised-on-a-farm fiddle playing traditional country roots.  You slap those three things together and you’ve got something that we think is really special.

CMR: How did you guys come up with the name, The Farm?

NH: The name, The Farm, came from kind of an insight into where we were in our lives when this group came together.  We all had separate solo careers going on, we were not looking to be a part of a group.  We got together as songwriters and that’s where this whole thing started was with songs.  As we started writing songs, we realized that our voices sounded special together, as a trio & other people were like “Hey! Are you guys a group?” – “Well, I don’t know.  You know, maybe we are.” As we decided that maybe we were going to focus on being a group, we said that if we are going to set our solo careers aside, if we are going to take time away from our own personal goals and take our personal focus and put it on a group we said, “You know, we got to be all in.  We got to be 100% all in & we are going to bet The Farm.” And when somebody said that in the conversation, hey wait a minute, that’s it, The Farm.  That’s our name, and that’s how it came up.

CMR:  Your first single “Home Sweet Home” will be impacting the country radio in September. What have the last few months been like for you guys?

NH: The past few months leading up to the release of our single have been amazing.  There are thousands of people in Nashville that are trying to get their music heard and for us to have a chance to get our music heard has bypassed a level of a dream come true for all of us.  And simply put we have poured every bit of energy that we had over the last year into making this record and to creating the sound of The Farm and the music that we are making.  We have an emotional attachment to it, and so to finally let that bird fly and put it out to radio is just an amazing feeling.  It feels great because we’re proud of it.  We are proud of the music and we are proud of what we have created and we want to share it with everybody.

CMR:  I know you have a handful of songs that are completed for the album.  What made you choose “Home Sweet Home” as your debut?

NH:  “Home Sweet Home” represents who The Farm is and it’s a great debut single for us because it represents the mash up of our three different styles.  It’s got the fiddle hook in the beginning.  It’s got Damien and Krista singing from their heart about something that means something to them and it’s got a chorus that represents the country guy that I am, and it represents exactly who the three of us are.  What’s really interesting about the single, and I think also one of the reasons that it is a special first release is, it’s the first song that we ever got together and wrote.  It’s ironic that first song became our first single and that’s pretty cool.

CMR:  Songwriting comes easy for some and a challenge for others, and I know that all three of you guys are talented songwriters.  Is songwriting something that will always be a prominent factor for the career of The Farm?

NH:  Oh, definitely yes.  Songwriting will always be a big part of who The Farm is and that stems from a couple of different reasons.  The first reason is because we were songwriters first.  We got together as a group through songwriting and the reason that our music resonated with us and we decided to form The Farm was because of those first initial songs that we wrote.  But not every song that’s on our upcoming record is our song.  We’re totally open to outside songs because Nashville is full of a sea of amazing songwriters, and they’re our friends.  We have all these great friends that we have made over the years that are amazing songwriters and they are all contributing their songs too and in the end country music is about songs.  And those songs have to resonate with people.  I can’t see any situation in which that songwriting won’t be a big part of our career and our sound in the coming years.

CMR:  You are also co-producing the album.  What has that role been like for you and is it a role that you see yourself continuing as your career grows?

NH:   I’m proud to be co-producing on this with Danny Myrick, who has been one of my best friends for years in Nashville, for a lot of reasons and one of them is that working with Damien, Krista and Danny in the studio is every producer’s dream come true.  I mean, these guys bring so much to the table and they’re so easy to work with because they are such talented musicians.  Other products that I have produced over the years aren’t that easy and this thing has just been a dream come true because everybody brings so much to the table and producing The Farm is really about trying to harness all the energy and all the talent that all these people bring to the table.  And so to be an artist/producer on this thing is really fun because it has been able to allow me to just shape something that is fresh & different and that doesn’t necessarily happened to Nashville very often.

The way we produced this record was fun.  We were able to go in and record the initial track similar to the way that a lot of people record their initial tracks in Nashville.  We went into a studio and we spent time until we had those tracks, but what was special about producing The Farm project was that we didn’t overdub and do vocals & everything in a traditional Nashville way.  We did it more in the way a rock record would be made.  We camped out in the studio for two weeks and we experimented.  We didn’t have to go home at 10 o’clock or 8 o’clock like doing they do in a typical Nashville session.  We stayed there until we were done that day and we experimented.  If something didn’t work, we did something different and we experimented with vocal harmonies, we experimented with instrumentation, we experimented with all sorts of different things until we were all pleased that we have something that was special, fresh and different.  That was a lot of fun as a producer.

And another thing about producing that I would like to say is it’s difficult to describe how really key Danny Myrick has been in this whole thing.   As a co-producer, he brings so much to the table.  He is a hit songwriter.  He wrote “She’s Country” for Jason Aldean with Bridgette Tatum, he wrote “International Harvester” for Craig Morgan.  He has written a lot of hit songs and he brings to the table an infinite knowledge of songs and of music history and vocal harmony.  He was originally part of the band Western Flyer, which is a vocal group, so he brings an infinite knowledge of what it takes to be a vocal group and what it takes to write & record hit songs.  Danny is kind of the hidden fourth member of the group.

CMR: At this time folks are just starting to hear about The Farm.  What is the most important thing that you guys would like across to on your new fans as you make your introduction as a trio into country music?

NH: The Farm’s music is supposed to be about fun and energy, it’s fun music for fun people.  Anybody that could see this thing live realizes fast that it is full of energy, and that we’re just having fun and we want people to have fun.  Now, there are some serious songs like “Be Grateful” is a serious song about a serious topic but at the heart of that song and at the heart of all our music is really real songs about real people and in living their lives.  And that’s what country music is all about.  The thing about The Farm that’s different from everything else is that we are trying to just be ourselves.  We are not trying to create something that fits into a mold.  We’re just trying to create country music in the best way that we know how, and we hope that it resonates people.

CountryMusicRocks feels strongly that their music will certainly resonate with listeners as it already has with us.  “Home Sweet Home” serves as a great introduction for The Farm and we think that listeners all around will enjoy it just as much as we did.  The Farm has several songs ready for their new album that are all standout tracks.  “Be Grateful”, as Nick mentioned, is a serious song about a serious topic.  The Farm delivers the song in a captivating way that is filled with passion & emotion as well as powerful lyrics such as “all the things you take for granted now, they started out as blessings first…” which truly are words to live by leaving a message behind that remains long after the song is over.