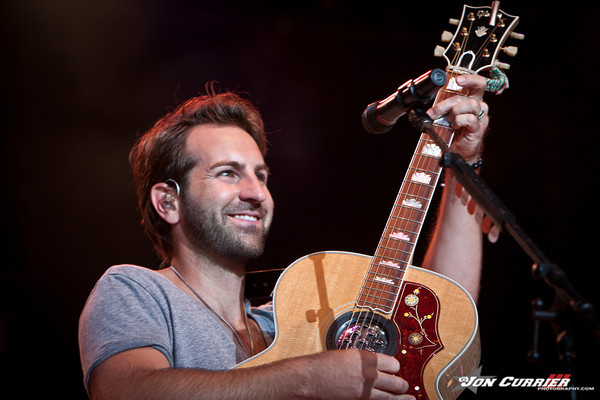 Josh Kelley is gearing up to join Taylor Swift on her final dates of the Speak Now Tour. In addition, it was just announced that he will be joining the Own The Night 2011 Tour with Lady Antebellum.

We recently caught up with Josh about his debut country album, Georgia Clay, new single “Gone Like That” and his involvement with a summer food service program to aid child hunger, plus much more.  Check out our interview with Josh and be sure to check his official website, www.JoshKelley.com,  to see if he is coming to an area near you.

CountryMusicRocks (CMR): You just released your new single “Gone Like That” to country radio and just premiered the new video.  Tell us about that song and what made you choose it for your next single?
Josh Kelley (JK): “Gone Like That” is actually the song that gave me the confidence to release an album in the country market. I wrote it hoping to get it cut, and my publisher said “no way, I don’t want to pitch this. I want you to do it. You need to make an album like this” – so I did! It’s a song about finally getting over someone, and then they step back into your life just when you are about to let go.

CMR: If you could pick one song on your album, Georgia Clay, that you can relate to the most, which song would it be and why?
JK: Probably Naleigh Moon. It’s the most personal song on the album, because it’s about my daughter Naleigh, who my wife and I adopted from South Korea in September 2009. I wrote it about the moment when I felt she really accepted me as her dad, and how she absolutely changed me 100%. Loving your child is a beautiful, and different kind of love and I wanted to convey that in this song.

CMR: You’re not only a talented singer but also a talented songwriter as you co-wrote all 11 songs on Georgia Clay.  If you could pen a song for any artist to record, who would choose and why?
JK: Oh wow, there are so many! Probably James Taylor. He’s a poet, so to get a cut on his album would be pretty cool.

CMR: Your involved with a Summer Food Service Program to help aid child hunger during the summer.  Tell us about  your involvement in this program and what this experience has been like for you?
JK: Before the Hunger-Free Summer program I had no idea that there are about 18 million children at an increased risk of hunger during the summer when school is out of session and they can’t depend on the free or reduced-priced meals they receive while in school. I have a young daughter. She’s just two years old and I want to be sure she has everything she needs to grow up healthy and happy. This summer I was honored to partner with the ConAgra Foods Foundation and Feeding America for its Hunger-Free Summer program because I can’t imagine living in a country where children don’t know where their next meal will come from. While on my Georgia Clay summer tour, I have had the incredible opportunity to visit and play with these children across the country who, sadly, are struggling with hunger. Hopefully I was able to brighten their day in the same way that their spirit and determination brightened mine. You can learn more about my visits and how to help at hungerfreesummertour.org.

CMR: You just wrapped up touring with Miranda Lambert.  What did you learn from her that you will apply to your future performances?
JK: She has a way of making every single fan feel like they are in the front row. From the first song in her set, she pulls them in, grabs them, and hits them in the face (figuratively) with a badass performance. She knows how to make the whole crowd pay attention to every moment. She’s a really great performer and I had a blast on her tour. I love that girl.

CMR: In a few weeks you are heading out on the Speak Now Tour with Taylor Swift.  Are you preparing for these tour stops any differently based on her fan base?
JK: Ha, maybe I’ll shave every night. But seriously, I’m so excited to perform for her fans. I hope to get them pumped and ready for her show. It’s going to be a blast. And my wife and daughter love Taylor, so they are excited to come out to a few shows too.

CMR: We always like to include 5 Quick Questions in our interviews where you answer the next 5 questions with the first thing you think of.
1) You can’t go a day without?Music and my family
2) Before you take the stage, you always….? Enjoy a cocktail
3) Your idea of relaxing is….? Fishing. I’m obsessed.
4) One item that you have to have with you from home while out on the road is…? My phone, so I can always stay in touch with my family.
5) When you think of Country Music the first thing that comes to mind is….? Storytelling and emotion.

Josh’s new album GEORGIA CLAY is available now in stores everywhere and online at digital retailers such as iTunes by clicking HERE.

Keep up to date with Josh on his official website, www.JoshKelley.com.