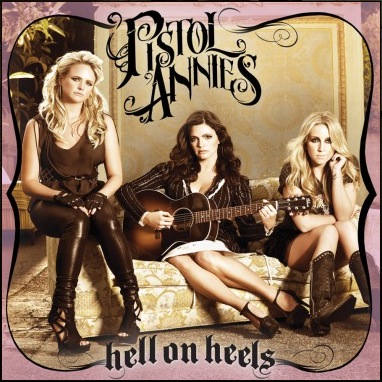 Pistol Annie’s have been making quite the impact since their unveiling earlier this year at the ACM: Girls Night Out event.  Since then, their debut single “Hell On Heels” has been resonating with country music fans all around.  The great news is, there is more where that came from as Pistol Annies is gearing up to release their debut album HELL ON HEELS on Tuesday, August 23rd.  Pistol Annies is comprised of Miranda Lambert, Ashley Monroe & Angaleena Presley. Their debut album HELL ON HEELS houses 10 tracks, all of which they wrote/co-wrote.

Their infectious harmonies and dynamic personalities shine through on this album.  Debut single “Hell On Heels” serves as a great introduction to the trio with their unmistakeable twang and just the right amount of attitude.  “Beige” is a song about Daddy’s pride & joy who got pregnant and subsequently followed up with a wedding, only she was wearing beige rather than the standard pure color white. “Bad Example” is another fun, standout track showcasing the girl’s sassy side.  There’s always someone that has to set the bad example, so Pistol Annies takes on that challenge as they “teach all the prim and propers what not to do”.  “Housewife’s Prayer” is song  about a wife who is struggling in life as she is trying to make ends meet.  While the bills keep getting higher, she’s thinking about setting her house on fire.  Written soley by Miranda Lambert, “Trailer For Rent” is another catchy tune on the album.  While you may not hear this song on country radio due to the use of a certain four letter word,  the song is sure to become a fan favorite.  “Family Feud”, written by Pistol Annies & Blake Shelton, is a story about a family fighting over material items after just laying their Mama to rest while one is just standing back watching it all go down and thinking “the good Lord giveth and the family taketh away”.

While the songs are rather brief, only averaging about 2:30/3:30 minutes, HELL ON HEELS is still an album you will want to add to your collection.  Their classic country musical arrangements take you back in time to some good ol’ country music while still keeping with the modern day appeal.  Miranda, Ashley & Angaleena come in with a bang for a debut album.

Pistol Annies HELL ON HEELS is available in stores & digital outlets on Tuesday August 23rd.  Be sure to visit your favorite retail store and pick up a copy or download from iTunes by clicking HERE.

Keep up to date with Mirana, Angaleena & Ashley by visiting their official website, www.PistolAnnies.com.