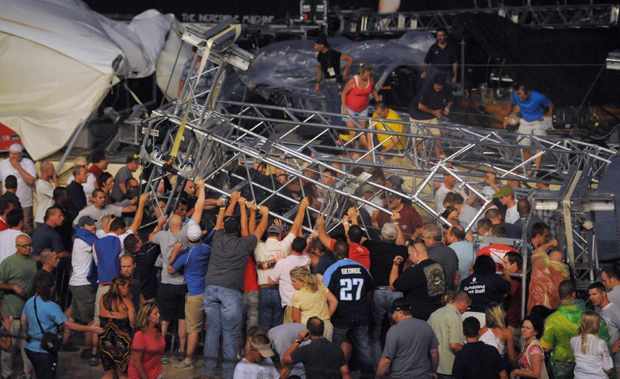 Country Stars took to social media last night after hearing about the unfortunate tragedy at the Sugarland Concert.  Due to severe weather conditions, the stage collapsed causing multiple injuries, some life threatening, and at this time has claimed 5 lives.

In true form, country artists come together and offer their thoughts, prayers & condolences to all those affected by this tragedy.

Blake Shelton: My prayers to the people at the Sugarland concert in Indianapolis…. Absolutely shocking and hard to comprehend… Beyond belief…

Jake Owen: Every guy in our crew has thoughts and prayers going out to folks at Indiana State Fair and our friends @Sugarlandmusic.

Edens Edge: Prayers to everyone at the IN state fair. It’s so scary when a stage collapses…. HB

Laura Bell Bundy: My thoughts & prayers go out to the Sugarland fans in Indianapolis as well as Kristian, Jen & the @sugarland band/team. tragic

Gloriana: Thoughts and prayers goin out to everyone at the @Sugarlandmusic concert at the Indiana state fair 2day. We are sending our love to u all -G

David Nail: We are with you Indianapolis, we were just there! Prayers your way! Huge knot in stomach, feeling completely sick watching/reading about Indy! All of us in Idaho are praying for ya!

Reba: What happened in Indianapolis tonight is what promoters, artists, crews and fans pray never happens. From my band, crew and the entire Starstruck organization, we send our thoughts and prayers to the 4 people who lost their lives tonight and to everyone who was at the concert . Jennifer and Kristen, I love you both.

Hunter Hayes: Praying for everyone at the fair in Indianapolis. Our thoughts are with you all tonight!

Neal McCoy: I’m so sorry about what happened at the Sugarland concert,,,;our thoughts and prayers go out to everyone involved

Chuck Wicks: The band and myself just watched the horrible footage of the Indiana State Fair…shocking. Thoughts and Prayers to anyone involved.

Keith Urban: “I just saw the footage from Indiana State Fair tonight on youtube and am absolutely in shock. We send our prayers and thoughts to each and everyone of you who were there and your families and loved ones as well. God bless you all” – KU

Dierks Bentley: man… my heart goes out to all the country fans at the Indiana state fair. praying for you all….

Sara Evans: Omgosh! Just heard about the stage at Sugarland concert! My prayers are with everyone involved! 🙁

Jason Aldean: Just saw the video of stage collapse last nite at the Sugarland concert. Our thoughts and prayers go out to all the families of the people who were killed and injured. Unbelievable!

Miranda Lambert: Rainy in hamburg NY. The show must go on. Our prayers our with the Indiana people who suffered from the storm yesterday.

Brad Paisley: Really sad about the sugarland stage collapse. What a tragedy.

LeAnn Rimes: My heart goes out to everyone who experienced the horrific event at the Indiana St. Fair last night. Prayers for the families that lost loved ones.

Brantley Gilbert: Our thoughts and prayers go out to the 5 people who lost their lives yesterday in Indianapolis @ the Indiana State Fair due to a stage collapse…. R.I.P.

Randy Houser: Saddened to hear what happened in Indianapolis last night. Please pray for @sugarland band and crew and families of lost and injured.

James Otto: What a tragic thing that happened tonight in Indiana! I pray for all parties involved!

Easton Corbin: My thoughts and prayers go out to everyone that was injured and killed at the Indiana State Fair tonight.

Jimmy Wayne: Everyone take a minute to say a prayer for the survivors and the family & friends of those who lost their lives in Indy yesterday when the stage fell during the concert. This is horrible news! Indy has a country music fan base that’s outta this world! Rock on Indy!

Steel Magnolia: So sad to hear about the lives lost and those injured at the Sugarland concert in Indianapolis. Our prayers go out to their families.Xo Meg

The Farm: Sending thoughts & prayers 2 the 4 people who lost their lives tonight their families & 2 everyone who was @ the concert in Indianapolis…