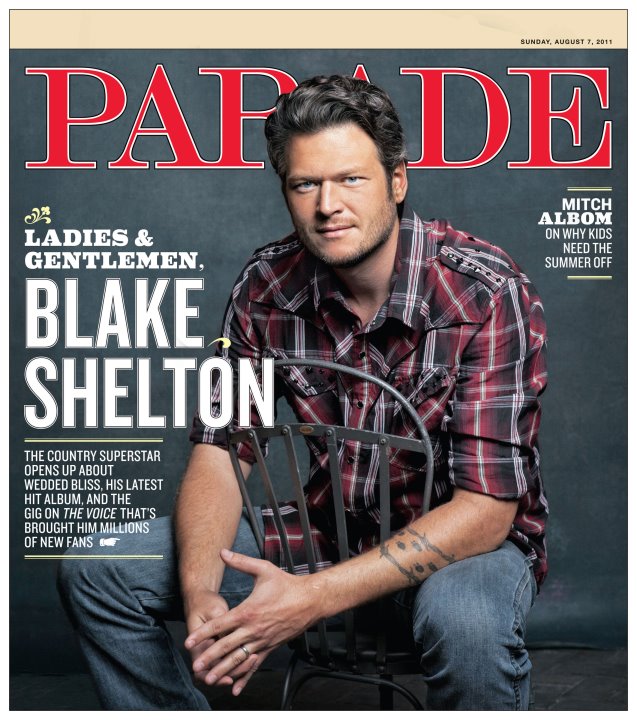 This year, country singer Blake Shelton gained millions of new fans thanks to his coaching job on NBC’s hit show The Voice and his wedding in May to singer Miranda Lambert, 27.  In this Sunday’s issue of PARADE, Shelton, 35, opens up about wedded bliss, his latest hit album, his comical tweets and more. “My life has been an open book, for better or for worse,” Shelton says.

On his near daily “I’m so drunk” Tweets:
“It’s just a way to say something ridiculous. Yeah, I drink a lot,” says the singer, whose beverage of choice is Bacardi rum mixed with Crystal Light, “but I’m not drunk every night.”

On having great success later on in his career:
“Ten years into my career, it’s starting to bust wide open. I’m glad it’s happening this way, because if it had happened earlier, I don’t know that I would appreciate it like I do now.”

Miranda Lambert says Blake’s foot-dragging frustrated her at times:
“It took me a while to realize, why push him to get married if he doesn’t want to?” Lambert tells PARADE. “When I finally told myself I’m just going to love him and see what happens, that’s when he bought the ring.”

Check out PARADE for more on Blake Shelton, including his TV gig and his latest hit album Red River Blue … and will there be babies in his near future?